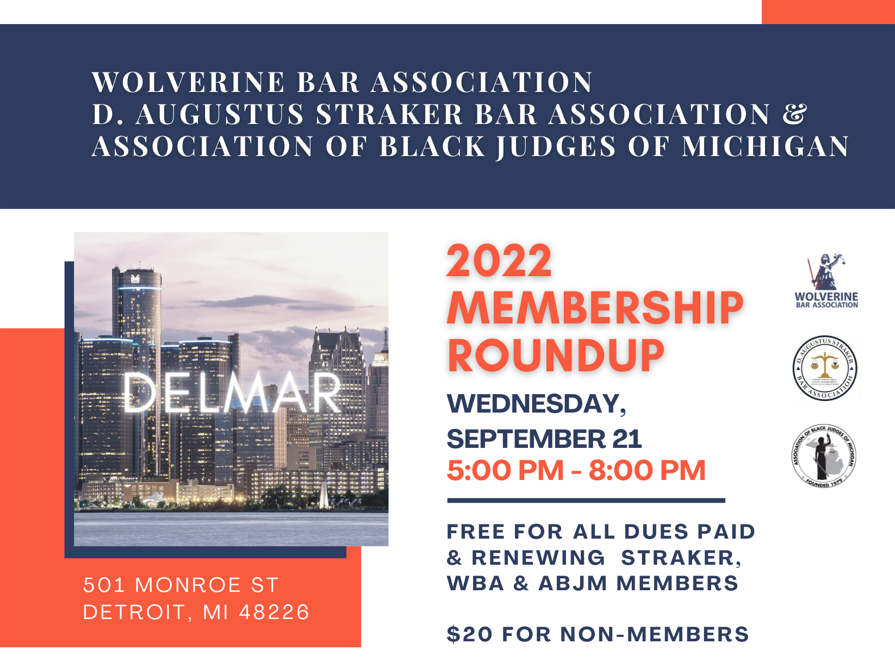 It’s Time To Join or Renew Your Membership In The Wolverine Bar Association at the 2022 Membership Roundup.

It’s Free For All Dues Paid & Renewing WBA Members.  It’s $20 For Non-Members.  All WBA Dues Paid Members Will Receive One Free Drink, And Karaoke Starts at 8pm. Come Out and Enjoy the Fun & Fellowship!

DETROIT – Michigan voters are preparing to cast votes in the August 2nd primary and/or November 8th election where many candidates will be vying for election or re-election to judicial offices.  In most elections, the judicial races are the least publicized.  Resultantly, voters know too little about the candidates.  This is not an issue only in Detroit but all over the state of Michigan.  The Wolverine Bar Association (“WBA”) “seeks to help all voters and resultantly has issued ratings in judicial races across the entire state” says WBA President Allen Venable.

Diane Hutcherson, Co-Chair of the WBA Judicial Qualifications Committee (“JQC”), Non-Supervisory Practice Leader and in-house counsel with AAA of Michigan, says that “the JQC is one of the WBA’s most important programs as it has a direct impact on citizens and their informed votes.”  Jenice Mitchell Ford, General Counsel of Detroit Public Schools Community District serves as Co-Chair of the JQC and served as the Chair of the 2009-2012 City of Detroit Charter Revision Commission.  She agrees and states that “the need to have qualified judges is paramount because judges have a significant impact on the matters that impact our everyday lives.  This is why the JQC is critical.”

Invitations to submit an application to JQC were issued to every judicial candidate seeking office in the state of Michigan in this election cycle.  Thirteen (13) responses were received and on July 11th and 14th, the JQC interviewed the 13 candidates and offered ratings of: (i) Extremely Well Qualified/Outstanding; (ii) Well Qualified; (iii) Qualified; (iv) Not Qualified; or (v) No Rating.  Such ratings are based on both the JQC’s interview of a candidate and a review of a candidate’s completed questionnaire.  An interview was offered to each candidate who submitted a questionnaire.

Evaluation of Judicial Candidates.  The JQC evaluates the fitness of each candidate for judicial office based upon the candidate’s:

(i)        Extremely Well Qualified/Outstanding (“EWQ”):  An individual must stand at the top of his/her profession and rank high among the best qualified judges or lawyers available for judicial service.  The candidate must have outstanding legal ability and background and wide experience, wisdom, intellect, insight and impartiality.  To be accorded this highest rating, a candidate should generally also have the breadth of vision and outlook which derives from participation in the civic, charitable, religious or political activities of the community and the work of the organized bar or other professional organizations.  In short, the candidate should be a person whose preeminence in the law and as a citizen is widely acknowledged and whose qualifications for the position are virtually hailed by judges and lawyers.

(ii)       Well Qualified (“WQ”):  A “Well Qualified” candidate exhibits essentially the same qualities as an EWQ candidate.  This person may have less experience but shows promise of all the criteria attendant to an EWQ rating.

(iii)      Qualified (“Q”):  A candidate exhibits a fitness for the judicial office.  Such candidate is considered average on an overall analysis of the Evaluation Factors.

(iv)      Not Qualified (“NQ”):  A candidate must be considered below average on an overall analysis of the Evaluation Factors.  This rating indicates that the candidate is not qualified for the subject judicial office.  However, such rating should not be construed as an adverse reaction to the candidate’s qualification as an attorney.

(v)       No Rating (“NR”):  If a candidate does not submit a questionnaire or attend an interview and there is insufficient information available to the JQC on a candidate’s fitness for the judicial office which the candidate seeks, the JQC shall make no rating of such candidate.  However, if there is sufficient information available to the JQC, even in the absence of a questionnaire or interview, the JQC may rate such candidate.

The WBA was established by a number of African American attorneys during the 1930s.  It was organized to coordinate the energies of the increasing number of African Americans admitted to practice throughout Michigan – the “Wolverine” state.  From its inception, the WBA assumed a leadership role in community and political activities.  This role continues to be paramount in the WBA’s endeavors today.

The roots of the WBA are in the Harlan Law Club, which was founded in 1919 by several attorneys in the Detroit area who were excluded by local bar associations throughout the  state of Michigan.  The club was named in recognition of the late United States Supreme Court Justice John M. Harlan.  Justice Harlan was dedicated to the goal of equality of treatment under the law for all in our society.  His philosophy was exemplified in the dissenting opinion of Plessy v. Ferguson, a 1896 U.S. Supreme Court decision.  The Plessy dissent espoused that the law should protect the rights of all individuals and be applied to all citizens on an equal basis.

In the 1930s, the WBA replaced the Harlan Law Club and expanded its influence from Detroit to the entire “Wolverine” state.  The WBA, like its predecessor the Harlan Law Club, is a powerful mechanism through which African American attorneys in Michigan address the unique needs of their community for legal service, representation and protection.

The WBA’s goals of equality and dedication to the community have not significantly changed from those of the founders of the Harlan Law Club nearly 80 years ago.  With many WBA members in judicial positions on the state and federal bench and over 800 practicing attorneys statewide, the WBA is continuing to meet today’s challenges with renewed vigor and determination. 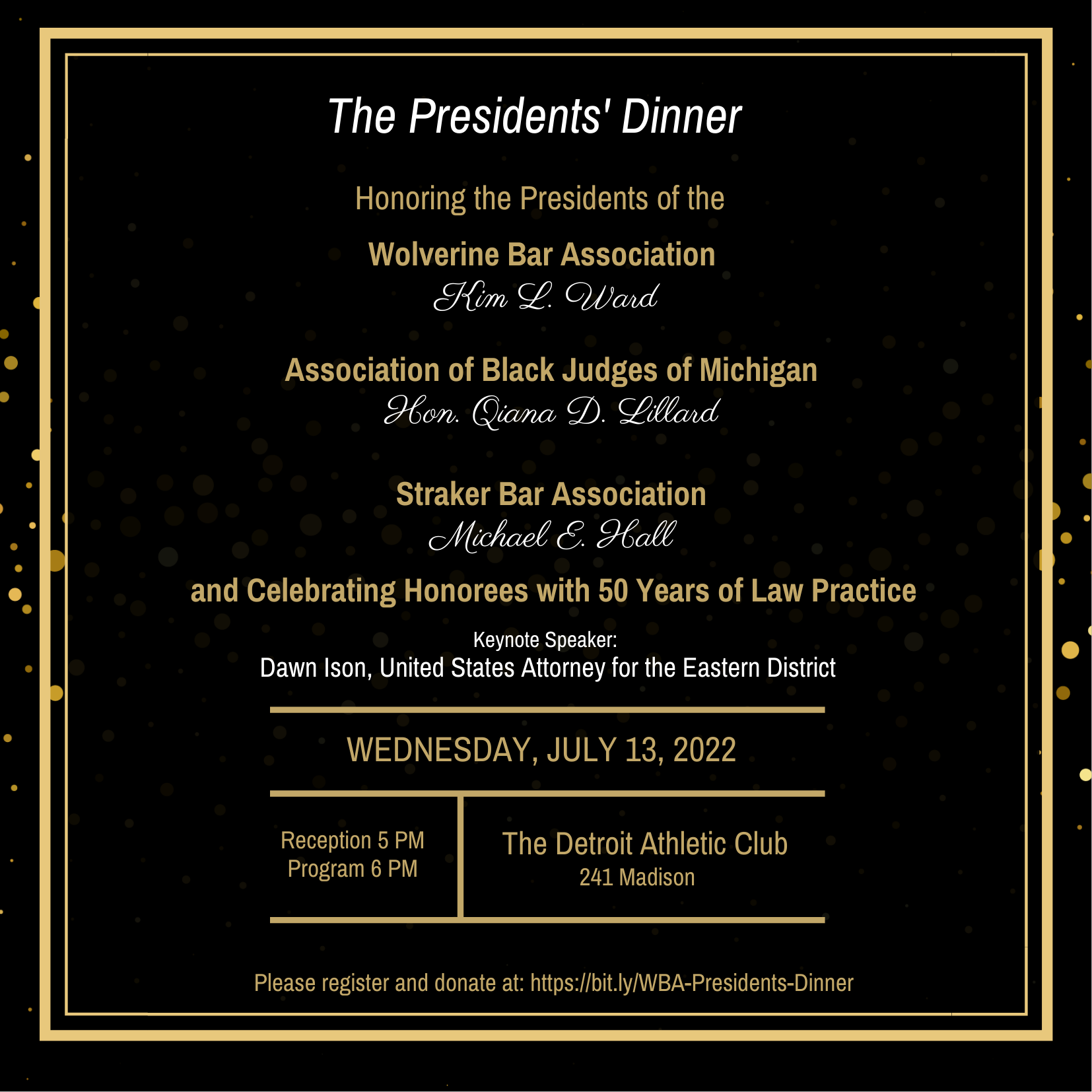 Please join the Wolverine Bar Association, Association of Black Judges of Michigan and Straker Bar Association for the Annual Presidents’ Dinner as we celebrate and extend gratitude to our Presidents for another year of outstanding commitment and service during the 2021-22 Bar Year!

Every year, more than 1,500 leaders from the legal, business, civic and political communities attend the Barristers’ Ball to celebrate the best of the Southeastern Michigan community. This black-tie affair commemorates the WBA’s 100-year commitment to diversity, excellence in the legal profession and improvement to the quality of life in the metropolitan Detroit area.

The Barristers’ Ball is the signature fundraiser for the Wolverine Bar Foundation, the charitable arm of the WBA. Since its inception, the Foundation has served as a force of change in Michigan. The Foundation has awarded thousands of dollars in scholarships to area law students, fostered attorney participation in pro bono activities aimed at benefiting the public, and sponsored community outreach 36300905.1 programs and seminars on legal issues designed to improve the quality of life in the communities where we practice. The Foundation is a 501(c)(3) tax-exempt, non-profit organization. Thank you to those who help us continue the mission and programs of the WBA and WBF by attending this event and/or becoming a sponsor.

This year, the WBF’s theme is “The Comeback.” Now, more than ever, we must work collectively to improve diversity and inclusion in the legal profession, in efforts to ensure equal justice and equal access for those in the community overall. To that end, we have bolstered our pipeline programming efforts, which include new scholarship, mentorship and job opportunities for minority law students and high school students. By sponsoring the WBF’s signature fundraiser, you will support these efforts and have a direct and lasting impact on those coming through the pipeline and the community all together. 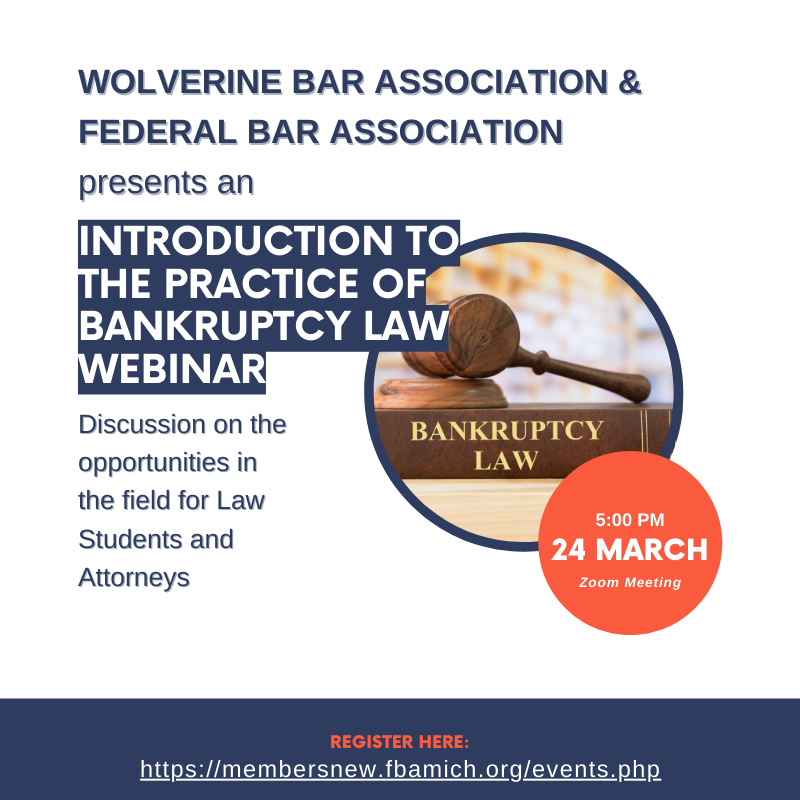 Join Wolverine & Federal Bar Associations for Introduction to the Practice of Bankruptcy Law: Why Bankruptcy Law and the Opportunities in the Field for Law Students and New Attorneys. 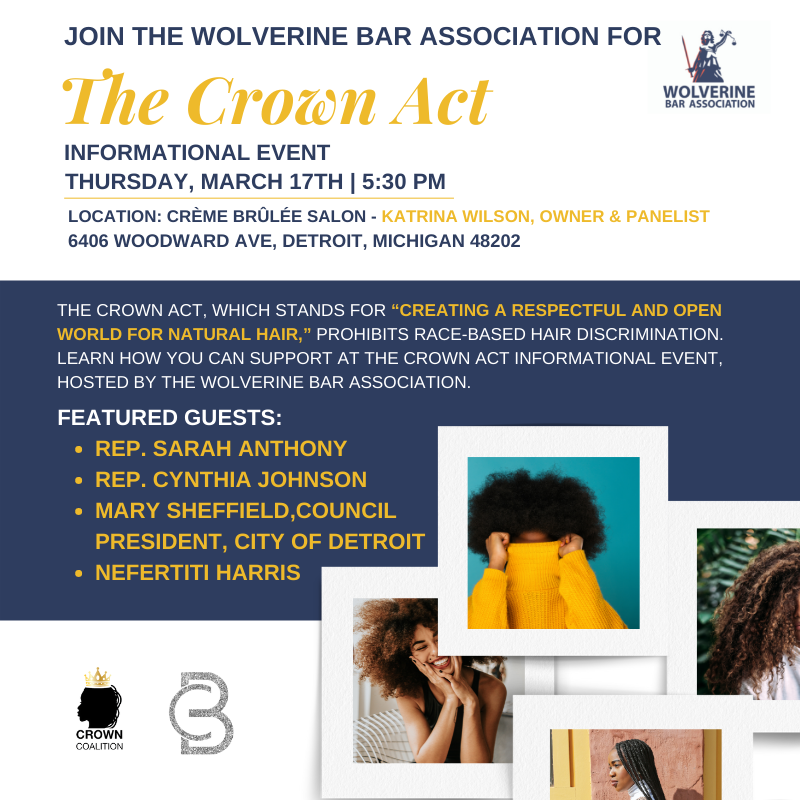 The CROWN Act, which stands for “Creating a Respectful and Open World for Natural Hair,” prohibits race-based hair discrimination. Learn how you can support at The Crown Act informational event, hosted by the Wolverine Bar Association.

The Association of Black Judges of Michigan (ABJM), the Wolverine Bar Association (WBA), D. Augustus Bar Association (Straker) and the Black Women Lawyers Association (BWLAM) present a seminar to teach attorneys interested in judicial appointment how to properly prepare with strategies, tips and insight from those that have been appointed. 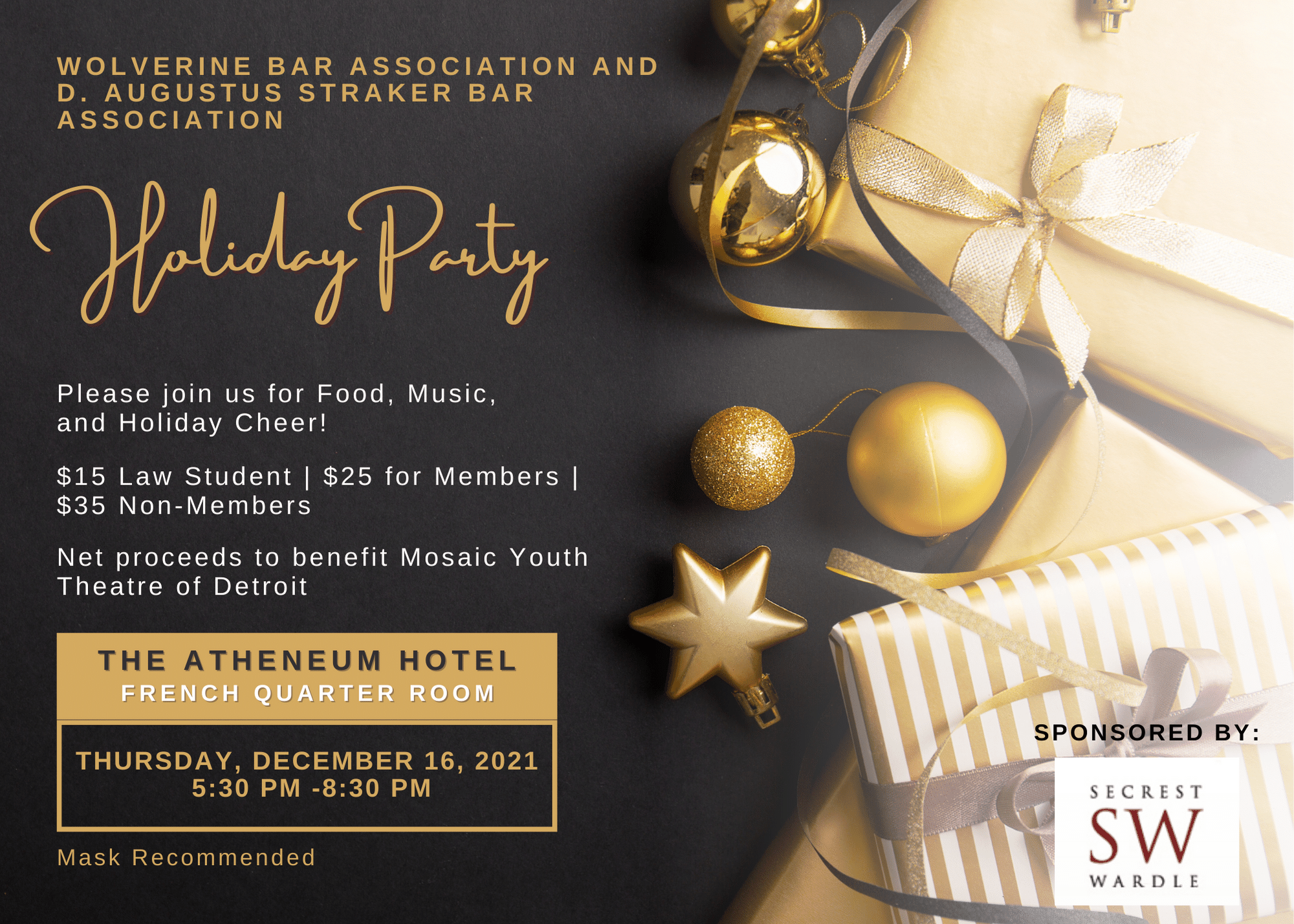 Join us for Good Food, Good Music and Holiday Cheer! 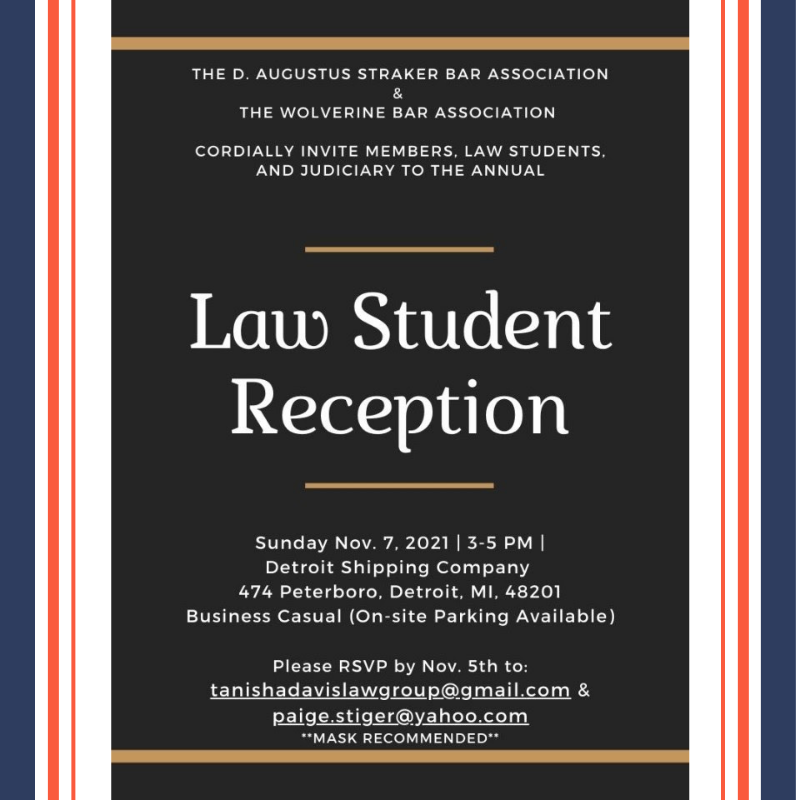 You are cordially invited to attend the Annual Law Student Reception
presented by
the D. Augustus Straker Bar Association and the Wolverine Bar Association. 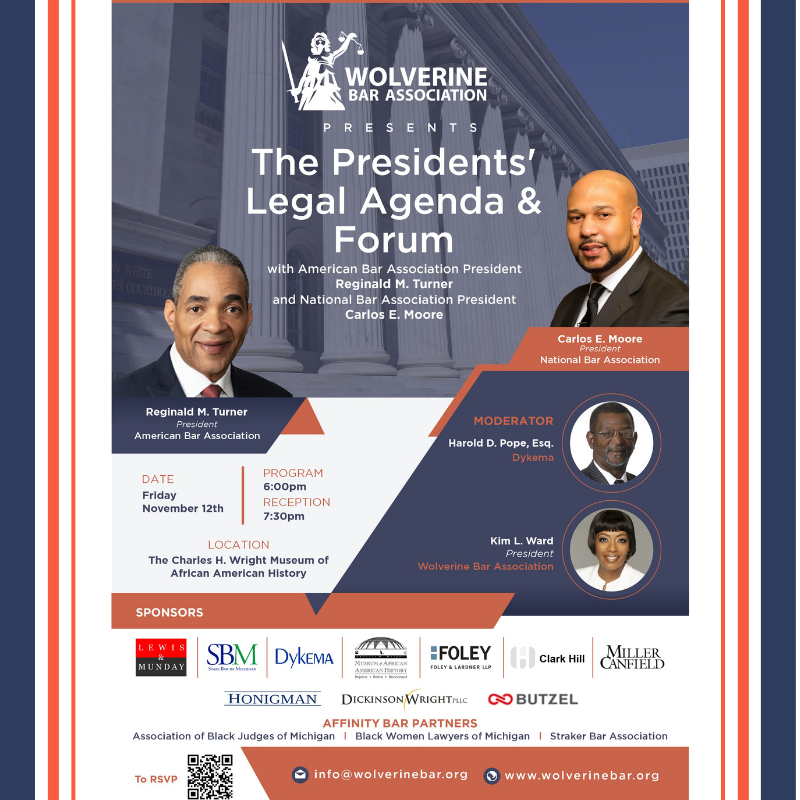